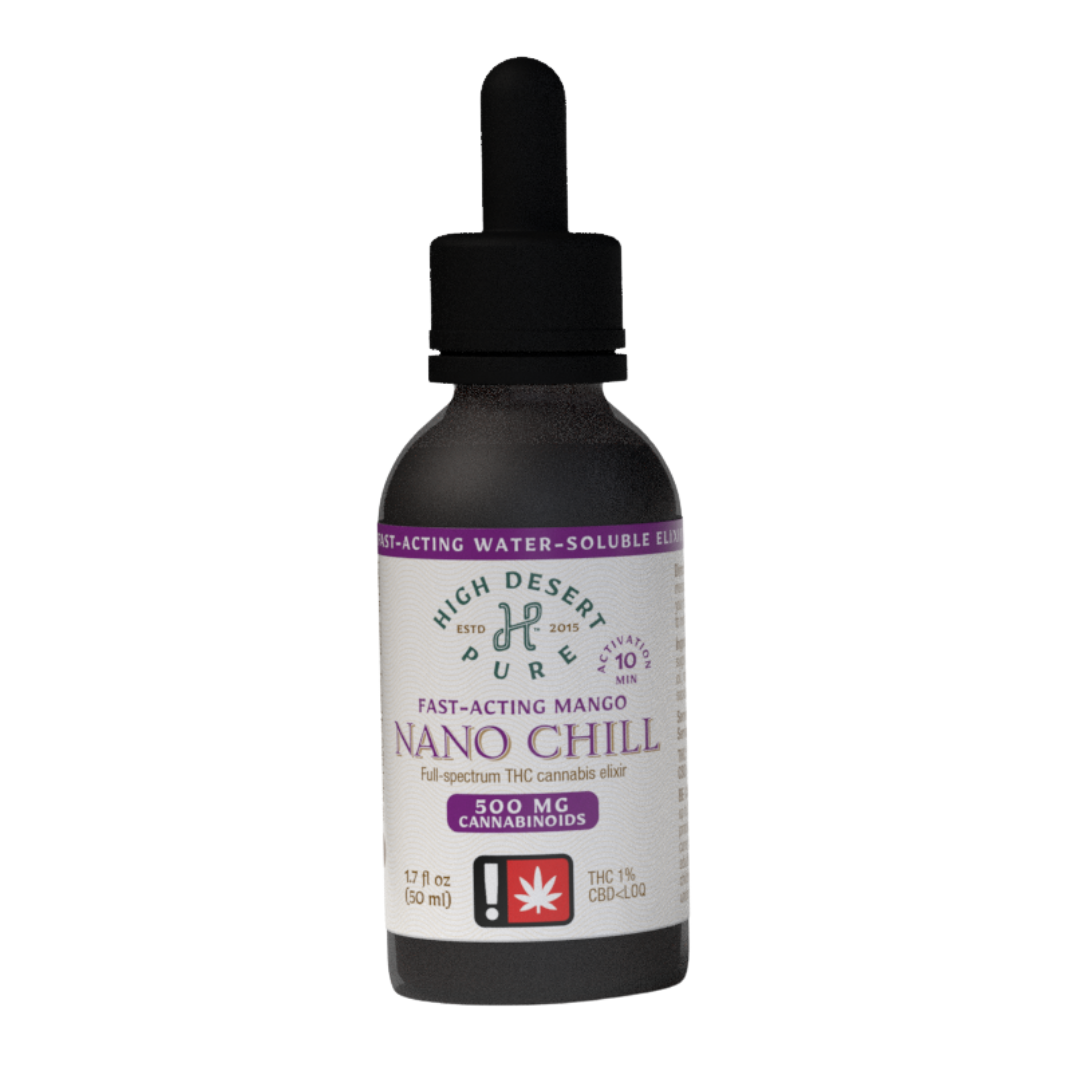 Chill out faster. Nano Chill is a fast-acting, water-soluble, nano-emulsified elixir with 500 mg of full-spectrum THC. It’s crafted with indica to provide a mellow, full-body high. With an unprecedented 10-minute activation time and a tropical mango flavor, Nano Chill is the ultimate recipe for carefree days and laid-back nights.

What’s the difference between a water-soluble, nano-emulsified elixir and a standard tincture?

No tincture or elixir on the market is just cannabis. It’s cannabis extract mixed into a base—either water or a carrier oil. Our tinctures are made with coconut oil as a base. Cannabis extract, which is also an oil, doesn’t like to mix with water, but it will happily integrate with a carrier oil. If you put standard cannabis extract in water, it would eventually separate and float to the top (because oil is less dense than water). However, to make our elixirs, we nano-emulsify the cannabis extract, mixing at extremely high speeds until the molecules become smaller and easier to mix. That’s why our water-based elixirs don’t separate over time.

Will I have a different experience taking a nano elixir instead of a standard tincture?

We expect that you will! There are a few advantages of water-soluble, nano-emulsified elixirs. You may have heard the term “bioavailibility” floating around. Basically, bioavailability is amount of cannabis that actually enters your system (as opposed to just passing through and getting urinated out with no effect). Our nano elixirs have a higher bioavailability than a standard oil-based tincture because human bodies are made of mostly water, so it’s easier for us to absorb water-based products. Also, because the cannabis particles are smaller (which is what we mean by “nano”), they can pass into your bloodstream more easily than bigger, bulky particles. When you take a nano elixir, you will feel the effect much more quickly (in about 10 minutes rather than 45-60). You will also feel a greater effect for the given dose. For example, a 5 milligram dose of elixir may provide as strong of a psychoactive effect as an 8 milligram dose of tincture. Finally, some people prefer the mouth-feel and taste of a water-based elixir, which is lighter and less viscous.

What dose should I take?

Every person and body is different. Each full dropper contains 10 milligrams of THC, so if you don’t yet know your THC limits, we recommend you start with a smaller amount—try between 2.5 and 5 milligrams. Wait at least 30 minutes for the tincture to take effect before taking more. Listen to your body and have fun!

How do I use an elixir?

Great question! Once you’ve measured out your dose, you can either squirt the tincture directly into your mouth or add it to a drink of your choice. You can also take it sublingually, which is a fancy word for “under your tongue.” Just squirt the dropper underneath your tongue, hold it there for 60 seconds, and swish it around before swallowing. This will allow some of the cannabinoids to absorb into your bloodstream more quickly and efficiently.